You are not a security camera, and that’s a problem

You are not a security camera, and that’s a problem 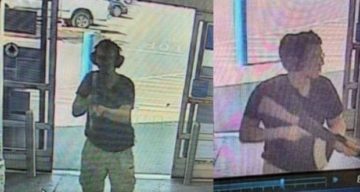 Take a look at the picture illustrating this post. It comes from a security camera in the recent El Paso Walmart incident, and has been shared widely in social media as well as more than one blog. It’s also being used to sell an idea, a notion really, that I think is unrealistic and maybe even dangerous.

Misinformation for fun and profit

I’ve seen this very picture used to reinforce two different yet related points of view. The first is, essentially, victim blaming: “When the people in the store saw this, why didn’t they do something?” The second is to sell a particular course of action (or, worse yet, a course in that action): “If you saw this coming, could you defend yourself?”

The trouble is that this isn’t what those people saw, and it’s not what you’ll see if you’re ever unfortunate enough to be placed in that situation.

Security cameras are placed well above the heads of the people they’re surveilling; they’re on high ground. That’s so they can have a clear field of view of an entire area, and of everyone within that area. If they were placed at eye level, what would they see? Not very much — only the people closest to the camera. Those people would block the camera’s view of everyone behind them. The camera would be pretty useless.

Of course, you’re at eye level. You’re only going to see the people directly in front of you; even if the store isn’t busy, there are still displays, shelves, kiosks, and checkstands — which are all at eye level, because that’s the prime selling space.

If, like me, you’re of slightly less than average height, a store looks a lot like a dense forest — and it’s worse with lots of people around.

In any case, you’re unlikely to see anything resembling that clear, unambiguous picture. And yet, you’re being told you should and you must. What good is that?

If you’re in a busy building when an attack like this happens, you’re not going to see that beautiful surveillance camera image. You’re probably not going to see the attacker coming at all. Your first indication that something is wrong is going to be the sound of shots; if the attacker is using knives or other contact weapons, it’s going to be the screaming of people trying to get away.

No matter what the method of attack, don’t expect that having “your head on a swivel” will give you enough advance warning that you’ll be able to preemptively avert the attack. Instead, you’ll need to respond to the attack — to recognize what’s happening with relatively scant information, and choose a course of action you feel is appropriate under the circumstances.

I won’t get into the skill of recognizing gunshots or how to decide whether to counter-attack or flee; those are topics for another day. For today, I just want you to think about the images you’re shown and how they skew what you believe about how incidents occur. Is what you’re being shown really what you’ll experience?

Then take a moment to consider how you’ll make decisions when you can’t actually see what’s happening.

It’s a little unnerving, but it’s probably what you’ll actually face. It’s better to think about it now, than when everyone around you is panicking.

P.S.: Registration is now open for my Threat-Centered Revolver course in Phoenix, AZ this November. We’ve already received a number of sign-ups, so you should reserve your spot today. You can learn more (and sign up) at this link.