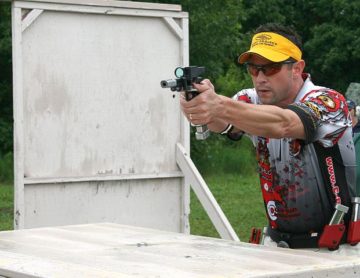 Much has been written about (and many arguments started over) the value of competitive shooting for the person who owns or carries a firearm for personal defense. There are generally two polarized views in this manufactured controversy.

I’ve been exposed to (and have friends in) both camps of thought over the years. Which one is right?

Once upon a time…

There was a time, many years ago, when I organized and ran “tactical” matches at our gun club. Our goal was to bring “realism” to competitive shooting. We wanted to use competition to give the participants exposure to “best practices” in defensive shooting, and the opportunity to practice and test those techniques against others.

We took ideas from the early days of IPSC, which originally had much the same goal, as well as then then-new International Defensive Pistol Association (IDPA) — whose avowed purpose was to take “practical shooting” back to its realistic roots.

It was, in fact, the experience of trying to make competitive shooting more realistic which led me away from the “competition is valuable” camp.

We tried making targets that were more anatomically correct, devising scoring systems that would attempt to take into account variables of shot placement and caliber, and instituting rules to prevent the participants from “gaming” the match just to get a higher score.

None of it really worked. The more we tried to make the system resemble an actual defensive shooting, the less it did so. People would always try to bend the rules and procedures to beat the other shooters, or to get a higher score than at the last match.

Many years and much education later, I see why the disagreement still exists, and it ironically stems from the same bad assumption: that defensive shooting skills are complex.

One side believes that those complex skills can only be maintained by constant and intense practice, such as in a competitive environment. The other side believes that the skills are so complex that no simplistic rule system can possibly recreate the circumstances of their use.

What I’ve come to see, from researching thousands of incidents and talking with other deep thinkers in the field, is that the shooting skill needed to prevail in an armed encounter just isn’t all that high. The shooting part of a defensive shooting just isn’t as complex as everyone thinks it is.

I’ve said this before, but it bears repeating: in the incidents I’ve studied, the vast overwhelming majority of successes involved people with no “advanced” training or extensive competitive shooting experience.

When a negative outcome does occur, it’s rarely because of shooting ability or tactical expertise; it’s usually the result of poor judgement before or after the trigger is pulled. There is no competitive shooting venue, and darned few training venues, which can teach that kind of judgement.

What is the real value?

I’ve come to see that competitive shooting does have positive value: it teaches people to become more comfortable with the use of their chosen firearm, and makes the mechanical operation more automated.

By doing so, it’s likely that the cognitive load of an actual defensive encounter will be reduced, which in turn may allow people to focus on processing the information they’re being fed and make better decisions.

On the other hand, will it cause someone to fail in an actual encounter because they learned “bad” habits? No.

What competition will do is take away the apprehension many people feel when shooting. It gives the participant some practice that he or she might not get if left to their own devices. At the very least, it won’t do any harm.

That’s the most anyone can really expect, and the most that we should ask of it.

The myth of the "concealed carry lifestyle"