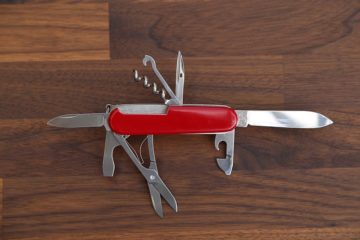 My approach to preparedness, whether the subject is self defense or disaster readiness, is to start with becoming better prepared to handle common, daily sorts of inconveniences. I find it hard to believe that someone who isn’t equipped with tools or skills to open a blister package when needed, would be able to handle a major event like an earthquake.

Small things can, and often do, turn into major problems if they’re not dealt with immediately. Back when I did search and rescue, I saw it happen on a very regular basis.

Preparedness, then, should always begin with the mundane and proceed to the extraordinary. And I can’t think of any two tools more mundane than the pocket knife and the flashlight!

While car keys might open an Amazon Prime box, they probably won’t open the thick blister packed doodad inside. That’s when most people try to find the scissors they know are in the back corner of the desk drawer, or beg someone to loan them a scissors or a knife.

Now imagine that same person having to deal with something more critical and not having a convenient someone to borrow from.

Being able to cut, to sever things, is a basic need. Opening a package is a simple task with few (if any) negative repercussions. In more serious instances, it might be necessary to free someone from a seatbelt, to remove their clothing to get to a severe wound, or to cut a sufficient length of cord to lash something down so the impending storm doesn’t send it through a window. Car keys won’t cut it (pun intended.)

It doesn’t take much of a knife to do those things, either. I’ve carried high-end “tactical” folders and plain old pocketknives, and for the vast majority of tasks (mundane and extraordinary alike), the old-fashioned pocket knife is more than sufficient. A knife about three inches long when closed, with one small and one larger blade, is sufficient. A small  Swiss Army knife can do wonders.

The important thing is to always have it with you and to become accustomed to its use. That’s how preparedness starts!

Looking for those scissors in the back of the desk drawer? I’ve never seen a desk drawer that had illumination, and the back corner is always dark. Wouldn’t it be great to be able to see back there to find the scissors?

The flashlight is truly one of those tools that, once you start carrying one, you can’t imagine how you ever got along without it. There are so many instances, like the desk drawer, in everyday life where a little extra light would make things much easier. Since most people don’t have a flashlight on their person they simply muddle their way through, never realizing how much they’re missing.

Beyond the desk drawer or the back of the cupboard, the flashlight is an important tool for personal safety. Checking under and in the backseat of the car before exposing yourself to the danger of a concealed predator is one very good defensive use of the flashlight, as is checking dark corners and other places where criminal attackers like to hide. Being able to spot them before getting within their reach gives options for avoidance that wouldn’t otherwise exist.

Using the light as a distraction device can make the difference between defusing a tense situation and ending up in a fight. I’ve used my personal flashlight on more than one occasion to warn off criminals; in one case, it convinced a car prowler I found rummaging through my vehicle that leaving empty-handed was in his own best interest. Criminals don’t seem to like bright lights shining directly in their dark-adjusted eyes!

Navigating a darkened stairwell during a building fire or after an earthquake may be the thing that makes safe evacuation possible. Being able to see, when entire neighborhoods have been blacked out by a power failure, facilitates movement to find and help others — or just to get food out of the basement!

Like the knife, the flashlight doesn’t need to be some high-end tactical contraption. A simple, bright LED light that runs on common batteries is the key. I prefer those that run on AA batteries, because they’re easier to find and rechargeable varieties are more common (and safer).

I would suggest not going to the bargain basement on this one, however, because the most common failure point I’ve found are the switches. The better the light, the better those components will be. I’ve found quality starts to get acceptably good in the $40 range. Save the $5 specials for stocking stuffers.

(I do not recommend, the USB rechargeable lights for this use. If the batteries die, I believe that being able to swap in fresh cells immediately — rather than waiting for the light to charge — is an important preparedness attribute. For secondary lights they’re fine, but not for the primary.)

Start building your resilience, your everyday readiness, so that the common little tasks and minor emergencies don’t even cause you to break stride. Once you get to that point, dealing with bigger things will be much easier. And the tools you use everyday will prove their worth even when the tasks become out of the ordinary.

Your pocket knife and your flashlight are where you start. Always be ready, for whatever life throws at you.

How to get prepared in three easy steps