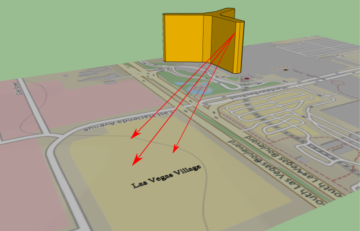 As I write this it’s been five days since a man opened fire on a country music festival in Las Vegas, killing 58 people and wounding over 500. While information is still being processed by law enforcement, and there are still many unanswered questions about the motives of the attacker, enough information has come out about the circumstances of the incident that we can identify definite lessons on how you might respond to this kind of event.

The attacker, a 64-year-old man who frequented the casinos in Las Vegas, took a corner suite on the 32nd floor of the north tower at Mandalay Bay resort. The room overlooked a concert venue northeast of the resort, diagonally across the intersection of Mandalay Bay Road and Las Vegas Boulevard (aka “The Strip”). The venue was an open-air site with a stage at the south end. Directly east of the venue, across Giles Street, lies Las Vegas McCarran Airport.

Approximately 22,000 people were packed into the venue, which is about the size of a small city block. There were, as near as I can determine, three entrances/exits on the west side of the venue (on The Strip) and two exits (no entries from what I could find) onto Giles Street.

The distance from the attacker’s room to the stage is just over 1,000 feet, or about 350 yards. The distance to the back of the crowd was a touch under 500 yards, and to the entrances just under 300 yards.

The shooting started at approximately 10:05pm and lasted about ten minutes. Naturally there was mass confusion as the attendees scrambled for cover where there was little to be had. Many tried to flee, but with so many people in such a small space movement was restricted. Along with the injuries from gunfire, many other people were trampled by the panicking crowd. Many injured people ran from the scene, some of them several blocks, leading to speculation that there were multiple attackers in several venues.

The victim’s options were limited because of the nature of both the attack and the environment, but that doesn’t mean they were completely helpless. There are many lessons to be learned.

Lesson One: Get away if you can

Sometimes the best thing to do in an active attack is to immediately get away from the scene — if you can do so both quickly and safely. But how do you know what direction is “safe”?

Many of the victims reported they had trouble discerning where the gunshots were coming from. This isn’t surprising to me, but it seems to be so even to some avid shooters. Unless you’ve been on the downrange end of a rifle bullet, it’s surprisingly hard to tell. This is because, for a rifle shot at long distance, you’ll actually hear two distinctly different sounds!

First you’ll hear a very sharp sound — a ‘crack’, for lack of a better word — which is the supersonic shock wave of the bullet itself as it passes you. Just a fraction of a second later you’ll hear a lower-pitched sound, possibly of lower volume. This second sound is the actual muzzle blast of the gun as it finally catches up to you.

The crack of the bullet seems like it comes from all around you, because in a sense it does. You only hear the sound as the pressure wave passes over you, and when it does you’re in the middle of it. Because of its pitch, duration, and location, it will echo from any hard surface making it impossible to localize. The muzzle report, on the other hand, is somewhat easier to track; it comes from a specific direction, which may be discernible. You have to listen for it, though, and ignore the sound of the bullet’s shock wave. Having been in the unfortunate position of being downrange from a shooter (more than once), I’ll admit it’s emotionally difficult to do.

In a city like Las Vegas, everything echoes — including the muzzle report. Between all of the hard surfaces and the supersonic shock waves, it’s no wonder people couldn’t figure out where the shots were coming from. In such a case determining the safest direction to go may be difficult at best. This is where your pre-planning comes in.

It’s reported that the concert-goers came in through the western entrances on Las Vegas Blvd. People remember where they come in to a building or space, and tend to head out the same direction. In this case heading for the exits, which were also the entrances, actually brought the escaping victims into the attacker’s fire. (Remember: the entrances were closer to the shooter.) Escape is only a valid survival strategy if you can do so safely; running into the attacker’s bullets increases your risk.

What many apparently didn’t realize is that there were exits on the east side of the arena, which were a somewhat safer option. From what I could discern, though, not many people took advantage of them. You can’t take advantage of something unless you know it exists before you need it.

When you enter any space, indoors or outdoors, take a few seconds to familiarize yourself with the exits. In a restaurant, for instance, it’s almost always a good bet that there’s an exit through the kitchen. In a mall or other retail space, there’s usually an exit through the “employees only” area. In many buildings you’ll find dedicated fire exits. Take some time to check the map kiosk, glance at the program you’ve been handed, read the placard on the wall, or simply look around. If you’re looking at a diagram or map, take a few extra seconds to orient yourself in space; memorize the landmarks that will help you find the exits more easily when everyone is confused.

Lesson Two: Moving in a crowd

Knowing where the exits are is one thing, but getting to them may be another. In this case there were 22,000 people crammed into a space that measured about 500 by 600 feet, and when the shooting started they  moved toward the exits they remembered. As we’ve learned that wasn’t the ideal direction. A crowd in panic will usually take you with them — or trample you in the process. Sometimes both happens.

The best thing you can do is move to the edge of the crowd as quickly as you can, because once on the fringes it’s much easier to run counter to the mob’s direction. It’s tough to do this against the traffic flow; it’s much easier to cut across traffic when you’re moving with it. The key, then, is to go with the flow enough to keep from being run over while simultaneously moving toward the edge closest to your objective. Once at the edge you can more easily pick your desired direction of travel and move relatively rapidly.

If you can’t escape quickly and safely, seeking shelter somewhere where the attacker (or his bullets) can’t reach you is the best course of action. In an open air venue like this there is precious little cover available, but that isn’t the same as “none”.

When the attack happens isn’t the time to be looking for safe shelter. In a crowd you can’t really see much, and if you’re short like I am you can’t see anything. Again, the time to pick your cover is when you enter and have time to scout the surroundings. Where can you shelter? What area is safe from gunfire? Where could you barricade yourself to keep an attacker from reaching you? In an open-air venue like the one in Las Vegas, getting in early and having a short walk around would not only show you alternative exits, but also important areas where you can take cover or barricade yourself if need be.

Take particular note of areas labeled “employees only”, “authorized personnel”, or other restricted status. When you need a safe place, those signs are to be ignored! Under a stage, for instance, may be a very safe place to be — but only if you ignore the signs which proclaim only staff is allowed.

One of the things which came through loud and clear in this incident was the value of immediate trauma care. There were many lives saved because of the fast response of people in the crowd, many of whom risked their lives to treat victims while still under fire. The only thing that went wrong was a shortage of critical supplies, made worse by the understandable delay of EMS response to the scene.

There were a few people in the crowd who were carrying tourniquets, but with over 500 victims the few tourniquets available (including those in the first aid tent) got used up very quickly. On Greg Ellifritz’s blog, he notes that radio traffic from the first aid tent indicated they were making improvised tourniquets from blankets to stop massive hemorrhaging, but were running out of blankets!

I strongly urge you to carry a trauma kit (tourniquet, hemostatic gauze, and a pressure bandage) wherever you go! In this case, had even 10% of the crowd been carrying a trauma kit there would have been more than enough material available to treat multiple wounds on all of the victims.

Respect for the victims

Do not construe any of the foregoing as being critical of the people who were victims of this attack. It isn’t my intention to criticize or second-guess them, only to use their experience as a learning opportunity for those of us who might one day find ourselves in similar dire circumstances. Many people did heroic things to help save their fellow concert-goers, including exposing themselves to greater danger by running into the gunfire. I applaud all of them at the same time that I mourn the casualties.

May we respectfully learn from their experience.

After Las Vegas: Don't be paranoid.