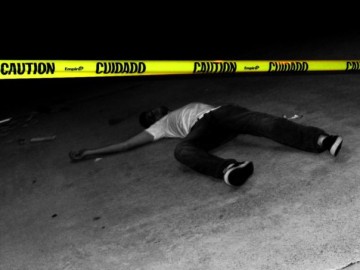 A sad tale crossed my desk earlier this week. It seems one Billy Williams was awakened in the night by one of his children, who reportedly told him that someone was trying to break into their house via the front door.

Mr. Williams retrieved a handgun from a safe in his bedroom and walked to the door. There were no lights on in the house, and the porch light was off as well. He opened the door and immediately fired a round at the intruder.

Sadly for all concerned, the person on the porch wasn’t an intruder — it was Mrs. Williams, who’d gotten off her night shift job early. She died on the porch of their home from a bullet wound to her neck.

(As always, I feel for everyone involved. Also as always, it’s not my intent to place blame. Instead, let’s use this incident as a learning tool so that others don’t make the same mistakes Mr. Williams made.)

We all learn the rule “be sure of your target” when we first start handling guns. That’s clearly not what happened in this case; Mr. Williams didn’t know it was his own wife standing in the dark, and he apparently did nothing to identify what he was shooting at. He simply opened the door and fired at the source of the noise his children heard.

If you’re reading this, you’re probably a “gun person” (the majority of my readers are). We tend to gravitate to the gun as our first line of protection. I suspect this is especially true of someone awakened in the middle of the night; after all, it’s a scary thing to be jolted out of your sleep by what might be a deadly threat. Without some thought ahead of time, some planning about how you’d handle this kind of occurrence, it’s easy to get caught up in the moment and do things you later regret.

Clearly Mr. Williams made no attempt to ascertain just who it was on his porch. The various news reports I’ve read of the incident indicate he didn’t try to illuminate the person who was trying to get in. It’s also fairly certain that he didn’t attempt to communicate through the closed door; I say this because I’m pretty sure his wife would have answered him had he done so.

Opening the door in the face of what he perceived to be a danger also wasn’t the best course of action. If he suspected there was someone on the other side of that door who was going to harm him, was it really a good idea to open it — even if he had a gun in his hand?

I submit that it wasn’t. If you’ve got a locked door between you and the bad guy, it’s probably best that you leave it where it is. Allowing a threat easy entrance is never a good idea, and exposing yourself to danger isn’t either.

Once he exposed himself to what he perceived to be a danger his response options were suddenly reduced. With nothing between him and what he mistakenly thought was a threat, and having a loaded gun in his hand, the die was cast. His actions up to that point had predetermined the outcome.

The only way he could have avoided killing his wife would have been to alter the conditions (and his choices) before that instant. Let’s look at what he could have done instead.

How could this have been avoided?

Mr. Williams is said to have retrieved his gun from a safe in his bedroom. Of course we don’t know what kind of a safe it was, but he gets kudos from me for storing his gun responsibly. Had he also staged a flashlight with his gun, and trained himself to grab the light before (or at the very least the same time) as the gun, he would have had a tool to help him identify any potential threat.*

As he moved to the door he also could have turned on the porch light. That simple act would likely have scared off a real burglar; they tend not to like being in the light, particularly if they know the homeowner is the one operating that light. This would have given him the chance to look out a window or a peephole to see who was there.

(Speaking of peepholes, we don’t know if his front door had one. A peephole of some kind is a “must” for any solid door. A porch camera with infrared capability, along with a monitor installed in a convenient location, might be an even better choice; video cameras allow a homeowner to keep track of what’s happening while on the phone with the authorities.)

I mentioned verbalization earlier. It’s entirely likely that a simple “WHO’S THERE?”, yelled in an authoritative tone, would have elicited a known response from Mrs. Williams. That same phrase becomes a challenge to a burglar, one which is likely to scare him (or her) off an unlit porch. The verbalization could have been combined with the sudden flip of the porch light switch for double the impact.

What if it IS a bad guy?

Let’s say it wasn’t Mrs. Williams, but really someone up to no good. If the challenge and the illumination didn’t scare them off then the script could continue: “THE POLICE ARE ON THEIR WAY. I HAVE A GUN; IF YOU BREAK IN YOU WILL BE SHOT”. A retreat into a darkened corner of the room, where someone breaking in couldn’t see the homeowner, would have given Mr. Williams plenty of opportunity to respond with appropriate gunfire from a position of relative safety. The flashlight in his hand would have allowed him to see the intruder while at the same time distracting the miscreant momentarily, which is always an advantage to the defender.

There were many ways in which Mr. Williams could have avoided killing his wife. All of them, though, hinge on one thing: preplanning.

“That would never happen to me”

You need to think about how you’d handle this kind of event, and perhaps even rehearse your response just as you rehearse a fire drill.

I always seem to hear from “that guy” who says “it couldn’t happen to me because my wife is always home/retired/doesn’t go out at night”. So it’s not your wife; maybe it’s your teenager coming home unexpectedly late from a party, or your drunken neighbor who is convinced it’s his house. Maybe it’s a neighbor who needs your help because someone broke into her house. There are many reasons someone might be standing on your porch in the middle of the night, and only a few of them involve a direct threat to you and your family. Automatically assuming it’s always going to be a threat, and making no provision to even determine if it is, is a good way to set yourself up for a similar outcome.

Start planning today how you’d deal with a similar situation, making sure that you allow for the very real possibility of a non-threat, then practice your response.

* — I mention this and other aspects of staging a defensive firearm in my latest book, Protect Yourself With Your Snubnose Revolver. It’s available now in Kindle, iBooks, and paperback formats.

Fort Lauderdale and the wisdom of traveling light

"What is mindset?" — an excerpt from my new book!