The Fort Lauderdale attack: it’s not the gun. Again. Still.

The Fort Lauderdale attack: it’s not the gun. Again. Still. 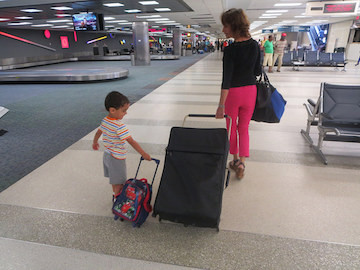 Just a few days ago a man with a history of mental issues boarded an airline in Alaska, after declaring his gun in checked luggage as required by law. He sat down in his seat and the suitcase containing his pistol and ammunition was placed in the cargo hold beneath him. When he got to his destination in Fort Lauderdale, Florida, he retrieved his luggage, went into the men’s room, got out his pistol and loaded it, and walked back into the crowded baggage claim area where he started shooting. He killed five people and seriously wounded six others.

The gun prohibitionists, true to form, wasted no time in blaming the tragedy on the “widespread availability of guns”. The gun-centric people in the Second Amendment community did exactly the same thing, but from the other side — blaming Florida’s laws against concealed carry in non-secure areas of the airport for the inability of the other passengers to protect themselves.

Both of them miss the point entirely. If the gun isn’t the source of the evil, then it can’t be the source of salvation from that evil. In both cases it’s up to the people involved.

Instead of seeing a Second Amendment story in this incident, I saw instead a story about fighting back against an attacker.

What stunned me about this incident was the number of first-hand accounts from survivors who were just a few feet from the attacker. One person said that he had dropped to his knees and at one point the gunman was standing over him; another said that the shooter was so close she could smell the gunpowder every time a round was fired. There are more such reports.

The gun, reported to be a Walther PPS M2 (I’ve seen pictures of the gun at the crime scene, and the supposition appears to be correct) has a magazine capacity of seven rounds. That means the killer had to reload his gun at least once, and there are reports he reloaded more than that.

Be very clear on what happened: in a confined space with hundreds of people this fellow was able to shoot through at least two magazines of ammo, possibly reloading two or more times, killing and wounding all of those people, and walked out to surrender to the authorities without so much as a bruise or a scratch.

The problem isn’t the gun, and the solution isn’t a new law — regardless of whether that new law tightens or eases restrictions on firearms possession in airports. The problem is  we’re not teaching people to fight back.

The gun neither the problem nor the only solution

The gun is not a magic death ray no matter who wields it. Surprisingly, people on both sides of the Second Amendment argument believe that it is; prohibitionists think all one needs to do is point it in the general direction of innocents and they get mowed down. Many of those on “our” side often say (and sadly seem to actually believe) the *only* thing that can possibly stop a bad guy with a gun is a good guy with a gun.

Both sides of the argument instill in the general public a belief that they’re helpless in the face of a mass murderer on a shooting spree. If you’re against guns, you’re told they’re evil killing devices against which you are helpless; if you’re pro-gun, you’re told if you don’t have your own you can’t effectively defend yourself. Both are wrong, but both dominate the discussion.

It’s only by getting past this focus on the gun, pro or con, will we be able to help people help themselves.

Self defense is more than just shooting

In the case of the Fort Lauderdale attacker, he opened fire in a room full of people who were carrying large, heavy bludgeons, also known as “suitcases”. There were no doubt fire extinguishers hanging on walls and support posts. If nothing else he was just one guy surrounded by hundreds of people, many of whom who were within arm’s reach. He was just one guy who had to stop shooting more than once to change magazines. Had he been rushed by even a couple of people during those times he could have easily been taken out of the fight.

Instead, people cowered because that’s what they’ve been conditioned to do.

It’s been said that the only true weapon is the mind. A couple of decades ago I might have argued that, but as I’ve learned and evolved over the years I’ve come to realize the wisdom of the statement. You first have to decide you will fight, that you will do whatever it takes to protect yourself and by extension the innocents around you. The will to fight exists independently of the tools you have available.

Decide that you will fight, and then learn to do it even if you don’t have your preferred tools available. Help others develop the same will to protect themselves. If we as a culture did so, people like this guy wouldn’t be able to shoot and kill unimpeded. Don’t wait for someone to give you permission to defend yourself, and regardless of where you stand on the gun control issue don’t think of the gun as magical. It’s just a tool wielded by a very vulnerable human being.

Learn to attack the vulnerability however you can.

Fort Lauderdale and the wisdom of traveling light