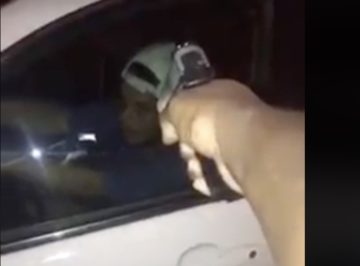 One of my big peeves in this business is the number of bad lessons that are presented in the context of “he had it coming!”

In these stories there’s usually a petty criminal (these are almost always minor property crimes) who is caught “red handed” by a virtuous (and obviously very manly) gun owner. The gun owner either heroically holds the suspect for police, chases him off at gun point, or fires a warning shot to scare the thief into submission.

I know why these stories are popular: they play to our outrage and the righteous desire to see criminals punished. Who doesn’t get mad at the thought of a stranger rifling through our possessions, looking for something valuable enough to carry away?

The trouble is these stories tacitly support bad decisions and actions on the part of the victim. Take today’s story, for instance:

Short version: a homeowner catches a thief in his car, at night, in his carport. He pulls out his gun, points it at the thief, and holds the miscreant in the car while he calls 9-1-1. And while they’re waiting for the police to arrive, the homeowner uses one of his hands to live-stream the encounter!

The story makes it sound like this was a really good idea because, well, the bad guy got what was coming to him. After all, who doesn’t want to be a crusading vigilante movie hero like John Wick, right?

Nowhere in the story did the writer bother to ask whether this was an appropriate response to a petty thief. (I won’t even get into the stupidity of live-streaming the event.)

The proper place for lethal force

Here’s the over-riding concept: the lawfully wielded firearm is to protect you, or other innocents, against an articulable threat to your very life. This is not just a philosophical position, it’s a practical one.

Our self defense laws are designed for those cases where lethal force is a necessary response. They recognize that sometimes, in order to protect innocent life from the illegal actions of others, it’s appropriate to use a level of force that might result in the death of the transgressor.

The use (or the threat of use) of lethal force outside of such cases is treated very differently. Shooting someone who doesn’t pose an actual threat to life will usually result in a trial, and often prison time, for the person who pulls the trigger. Threatening to use lethal force — “brandishing” — in cases where that level of force isn’t warranted is also a punishable offense.

Using a lethal tool to scare someone into submission is, then, both inappropriate and perhaps even prosecutable. Holding someone at gunpoint and holding him for police, absent the commission of a serious felony crime, is a legal gray area.

One thing isn’t gray: doing so is dangerously dumb.

Just because it “worked” doesn’t mean it’s worth emulating

Let’s look at this incident from a practical standpoint. What if the thief hadn’t obeyed the owner’s commands? What if he started the car and drove away, or simply got out of the car and walked away? What would the owner do then — shoot? With what justification?

If he didn’t shoot, then his display of force was for nothing. His bluff was called. What happens the next time he bluffs?

Or maybe next time he actually pulls the trigger, and kills an unarmed teenager who was pilfering his sunglasses. How well is that going to play in court?

What if the suspect had a lethal weapon of his own? Someone ignorant enough to try to hold a petty thief at gunpoint is probably not ready for the explosion of violence that someone who’s been cornered is capable of unleashing. It could have resulted in serious injury, or even death, for both of them.

Finally, what if the thief had a lookout, a violent buddy who came to his rescue? The homeowner was so busy being a social media hero that he couldn’t possibly have been paying attention to what was going on around him. He was the perfect candidate for an ambush.

Yes, what he did “worked”. There are also a lot of people who have survived auto accidents without wearing their seatbelt, but that’s not a ringing endorsement either.

The firearm is not a tool to force others to comply with your wishes. Yes, the police can do that, but unless you’re a sworn officer you don’t have their training/experience or the legal protections which make it possible. For a private citizen, it’s a dangerous game to play.

What should the owner have done? He should have stayed in a safe place, called the police, and let them deal with the problem. No, he wouldn’t have had the satisfaction of catching a criminal or the ego stroke of being a “hero”. He also wouldn’t have exposed himself to physical danger or legal risk, either.

There are some who will argue this on the basis that we “can’t let criminals win”. Their contention is that society needs to send a message to petty criminals, lest we be overrun with them.

We do send a message to criminals by having jails and courts to punish them. Is the punishment severe enough to guarantee they won’t re-offend? Some would argue that it’s not. But it’s no reason to put oneself in physical danger and legal risk by trying to “teach them a lesson”.

Shooting another human being is a life-altering experience, as it should be. Do so, and your life will irrevocably change. Shooting a person because you escalated, perhaps even caused, an altercation may end your life as you know it today. Are you going to risk all that just to catch someone stealing pocket change from the car’s console?

Don’t put your life, or even your liberty, on the line by using your firearm when it isn’t warranted. Let the police do their job while you stay safe.

There are no defensive shooting experts.