Steyr AUG surprise: an unappreciated advantage for defensive use

Steyr AUG surprise: an unappreciated advantage for defensive use

You might remember that I’ve spent the last 18 months living with the Steyr AUG A3 M1 bullpup rifle. During that time I’ve been rather exclusive, using the AUG in place of all the other centerfire rifles I know and love. (Of course I’ve shot a lot of rimfire rifles during that time, but I think the Steyr will forgive me.) I’ve paid very little attention to any other defensive rifle, especially the AR-15, and haven’t really even had anything else in my hands.

Last week, though, I had occasion to pull some AR-15s out for a photo op and noticed something about them: they were ungainly!

The bullpup and the carbine

The 16-inch-barreled CAR-15, which always felt so light and so handy, didn’t feel so handy any longer. As I moved through the house and out into the woods for the photo I had to consciously move the muzzle around to keep it from hitting or being caught on objects. Even with the muzzle held vertically, overhead obstructions like door frames and branches were an issue. It sounds silly, but it seemed that I suddenly had an awful lot of work to do.

I never noticed that with the Steyr AUG!

Stepping back: what does a defensive rifle need to do well?

The rifle, for most of us, is not the firearm we’re likely to have in our hands (let alone hanging from a complicated sling) when we recognize we need it. The rifle is the gun we’ll probably always need to go and get; to retrieve from its storage place. It needs to be taken out of its safe/box/rack/drawer, put into a condition of readiness, then taken to the point of employment. In some cases that point might be in the same room, but it might also be outside and perhaps even a short distance away. We need to be able to move the rifle quickly and easily from place to place.

Unlike a handgun, which is small enough to be carried conveniently until needed, the rifle is an ungainly thing. The handgun has a holster, not so the rifle; there is no direct analogue. (And no, the sling is not a “holster for a rifle”. Try running with a slung rifle and see what I mean.) The long, skinny rifle profile isn’t particularly amenable to rapid movement, especially when there are things in the environment to get in the way. Obstructions are the reality of home protection and perimeter defense, two jobs for which the rifle is a superior choice.

That being the case, one of the traits a defensive rifle needs is rather ill-defined: maneuverability. Traditionally we’ve looked at the overall length of the gun, factored in the weight, and used that to describe maneuverability. Why, then, was this AR carbine — which is both short and very light — harder to maneuver than the AUG with which I’ve been spending so much time? After all, the AUG is only about six inches shorter, and considerably heavier; it shouldn’t have as much advantage as it seemed.

I finally realized two things. First, weight (within reason, of course) only matters if you’re carrying the rifle for a long distance over a day’s time. For a defensive tool the gross weight isn’t nearly as much a contributor to maneuverability as the weight distribution. A light gun with a distinct weight-forward bias is more taxing to maneuver around obstacles than a heavier gun that’s more balanced. The Steyr AUG is heavier than the CAR-15, but the weight is perfectly centered on the pistol grip. With the grip in the firing hand, it was simply easier to move than the nose-heavy AR-15. 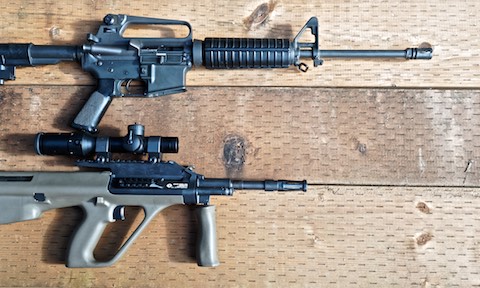 The second thing I noticed was that the overall length isn’t as important as the length from the point of control. The pistol grip, which is where we usually hold the rifle when we’re moving around, is the control point. From there to the end of the muzzle is more important to maneuverability than the distance from the butt to the muzzle, because the distance from the control point determines how close the muzzle can be to the body. The closer it is, the less likely it is to run into obstructions.

In the comparison between the two guns, the overall length difference is roughly six inches (in favor of the bullpup rifle.) The difference in length from the control point to the muzzle, however, is a little over nine inches! That turns out to be a huge advantage of the Steyr bullpup design.

That nine-plus inches, combined with the neutral weight balance, made the difference in maneuverability. It was no wonder that the CAR-15 seemed to hard to handle compared to the AUG. As it turns out, a heavy but maneuverable rifle beats a light but not-so-maneuverable model. These are the things you find out only after you’ve lived with a piece of equipment for a while!

As you may have surmised from my love of revolvers and lever action rifles, I’m a hard sell on new ideas. The bullpup concept is one that I find myself vacillating on; is it really better than what I’ve always used? When it comes to the tasks I really need a defensive rifle to do, I keep finding that it is. The maneuverability advantage turns out, in practice, to be more important than I originally thought. For a gun that needs to be retrieved and moved to be able to employ, the more maneuverable one will be more efficient to use.

In this example, the Steyr AUG holds the surprising advantage.

Now you can LISTEN to the blog!

Putting your self protection plan into action

What do you do with all your situational awareness?