The AR-15 does a lot of things well. Except this.

The AR-15 does a lot of things well. Except this.

Sometimes I think I’m the only person in the shooting/self defense field who’s actually thinking about the average person: the man or woman who doesn’t want to become a soldier or a police officer, doesn’t want to look like one, doesn’t want to spend all their free time on a shooting range, and doesn’t care about a PR in a WOD. (I had to look those up to figure out what they were, too!) I mention this because I take a lot of heat from people who are heavily into the athletic and enthusiast parts of the self defense business, those for whom shooting and training is an all-consuming hobby.

The latest criticism from the hobbyist camp came as the result of a remark I made about guns like the M1 Carbine, Ruger Mini-14, and lever-action rifles and their application for home defense. The responses almost all centered on one common thought: “what can they do that an AR-15 can’t, and for less money?” I was then regaled with tales of the hobbyist: how you can get all kinds of different triggers and stocks and sights and handguards and grips and magazines and accessories for what was their favorite gun.

I don’t deny any of that. The reality is, though, that the guns I mentioned do have some advantages over the AR-15, and one in particular is something the AR does incredibly poorly. It’s also something which is hard for non-hobbyists to understand, and one which trips up even quite a few of the “experienced” shooters. In short, the AR-15 doesn’t always put bullets where the shooter expects them to go at normal defensive distances!

Before you get all upset and call me names, allow me to explain.

This issue with the AR- 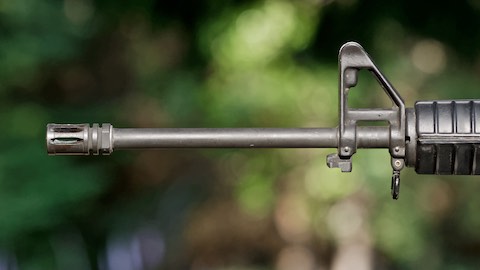 15 revolves around the fact that its sights sit very high above the bore of the barrel — 2-1/2 inches high, which much higher than in any typical hunting rifle and higher than any rifle which our military had used up to its introduction. The reason for this is because the AR-15 barrel sits inline with the buttstock to minimize the recoil and muzzle flip during full-auto fire — a valid military consideration. The problem, however, is that the barrel sitting so low wouldn’t allow a human head to see through the sights if they were mounted in a traditional manner. The solution was to raise the sights, either optical or iron, in order to meet the eyes.

At normal military-type rifle shooting distances this sight offset (known as height-over-bore) doesn’t present too much of an issue. The problem comes when the rifle is pressed into service at close ranges, because the difference between where the sights are and where the bullets come out can be up to 2-1/2 inches. That means at very close distances the bullet is going to impact the target 2-1/2 inches below where the sights are pointing!

Now this impact difference irons itself out as the distance increases; beyond about 25 yards or so, it ceases to become a major concern. Hopefully, though, you see the problem: I doubt any room in your house is longer than 25 yards, which means if you have that AR-15 for in-home defense you’ll need to consciously remember to aim around 2 inches higher than where you want the bullets to hit!

I’ll concede that if you’re shooting at the upper chest of a home invader the difference in impact point probably isn’t significant; if you need to make a more precise shot, however, you definitely have to take that impact difference into account and choose a different aiming point “on the fly”!

No problem, you say? You’ll just train yourself to do that? You’d be surprised how many rifle students I’ve seen who, even after a couple of days of training and being reminded many times, will still forget to adjust their aim point when they get closer than that 25 yard mark. Mix in the normal mental and physical changes as the result of a lethal threat, and I suspect most people are just going to put their sights on target and pull the trigger without ever considering the sight offset. If people forget to do it on a nice sunny range with only yours truly supplying a little pressure, they’ll almost certainly forget it when the guy with the hatchet comes through their door!

It’s possible, and I’ve heard it suggested, that the user simply sight the gun in to produce the desired point of impact at a very close distance — say, 5 yards/15 feet (some sighting arrangements may not even allow a zero at such a close distance.) This would give the typical homeowner point-of-aim, point-of-impact at a typical room distance. But what if the shot needed is just a little further out — say, in your hallway or garage or yard? At just 30 feet, the bullet would hit about 2-1/2 inches high; at 45 feet, it’d be 4-1/2 inches high; and it gets MUCH worse from there. When you have a high height-over-bore, this is simply a fact of life; you’re going to need to remember to compensate somewhere, and the only question is at what distance you prefer to do it. 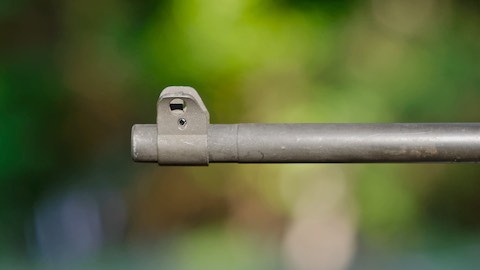 As I said, even experienced shooters often fail to remember to adjust for the sight offset at close distances. It takes a lot of training under realistic conditions to do so consistently. The big advantage that guns like the M1 Carbine, lever-action, and Mini-14 have is that they’re designed with conventional buttstocks, which bring their sights up to the eye of the shooter. This results in their sighting arrangements being physically close to the bore line, which means that the sight/impact differential is less than an inch — sometimes much less. The M1 Carbine sight pictured, for instance, has a sight height of only 3/4 of an inch. That’s inconsequential at any self defense distance.

At any plausible defensive shooting distance, then, these rifles will have a point-of-aim, point-of-impact that are essentially the same. The shooter doesn’t need to remember to compensate for the sight offset during critical shots, which means that their job is easier; they can concentrate on dealing with the threat, not on arcane operations of their gun. That’s a huge and almost always overlooked advantage.

The hobbyists will screech “it’s just a training issue!” Yes, it is — that’s my whole point. It’s something that has to be trained, takes a lot of time and repetitions to master, and for the average person may never become an intuitive skill. I’m certainly not saying that the M1 Carbine, Mini-14 and lever action rifles are perfect, and they may or may not be a good choice for a defensive tool for other reasons, but we need to acknowledge that they do in fact have some compelling advantages. The fact that they put their bullets where they’re aimed, every time, is a big one!

A burglar, a boy, and bullets aplenty: how not to respond when life isn't at stake.

Want to improve your skill development? Take notes during class. Lots of 'em.