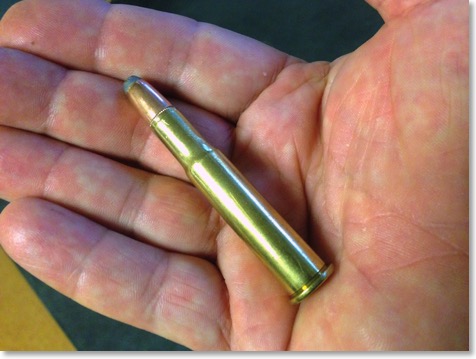 .
The .30-30 Winchester, more properly known as the .30 Winchester Center Fire (WCF), is one of the most popular cartridges in the world. Why?
The .30WCF, more popularly known as the “thirty-thirty”, is a staple of deer hunting in this country. (Well, it certainly used to be, but I’m getting ahead of myself.) Introduced in 1895 as a new chambering for the Model 1894 lever-action rifle, it was our first commercial smokeless powder cartridge.

The .30-30 quickly established a reputation as an excellent game round and people of that era used it to take deer, bear, elk, moose, and just about everything else in North America. More modern cartridges would come later (the .30-30’s biggest rival, the .35 Remington, was introduced a decade after the .30-30), but the .30-30 had a big head start and remains a very popular round even today.

As time went on the .30-30 was relegated more and more to shooting deer-sized animals. More powerful cartridges were available and to be fair, the .30-30 was marginal for use on the bigger animals. Though technically legal for moose and elk, I don’t know too many hunters who would recommend it except in the hands of a true expert who understood the its limitations.

The reason for the round’s popularity was simple: it had enough power to do the job, had fairly mild recoil, and was typically chambered in light, easy-to-carry lever action rifles. That’s a great combination even today, so you can imagine how wonderful it was back when it was still a new thing!

When I was growing up here in Oregon, I remember there being two kinds of rifles: deer rifles, which almost always translated to a lever-action chambered in .30-30; and elk rifles, which were almost always .30-06. That isn’t to say there weren’t others, of course — lots of people (including my uncle, who was a terrific hunter) swore by the .300 Savage, which was a better all-around cartridge than the .30-30, and the .270 Winchester was popular for hunting pronghorn antelope in Oregon’s high desert — but those were the standards.

What I find interesting is how the acceptance of the .30-30 changes with geography. Out here in the west, the .30-30 was always the reigning deer cartridge; in the woods of the eastern U.S., however, the favorite round seemed to be the .35 Remington. Some people attributed that to the Remington round having better “brush-busting” behavior, though I think that’s overblown (the only person I can remember off the top of my head who actually tested that behavior under controlled conditions was Francis Sell, a hunting writer from the 1950s, and I don’t recall either round doing particularly well in that regard.)

Because the .30-30 was loaded with blunt-nosed bullets (to be used in tube-magazine rifles, where a pointed bullet could detonate the round in front of it while in the magazine) its long range performance was limited. Today we have the excellent Hornady LeverEvolution rounds which use a soft polymer tip to provide the necessary cushion while giving better aerodynamics, but the .30-30 is never going to be a long range killer in the way that the .308 or .30-06 are.

My first exposure to deer hunting was, of course, with a Winchester 94 in .30-30. I was taught how to get close to my quarry and where to put that 170 grain flat-nosed bullet to effect a rapid kill, and it always worked. In fact, if you want to see textbook bullet expansion shoot a deer with a 170 grain .30-30; it’s been around long enough that ammunition makers understand very well how to make that bullet work, and I don’t think I’ve ever seen a slug from a .30-30 that didn’t show perfect mushrooming and complete weight retention. Ever since then I’ve had at least one in my rifle rack, and when I go deer hunting it’s often the first gun I pick.

(Actually, it’s the gun I pick if I’m hunting other than on my own property, where I know all of the ranges at which I might take an animal. For that use I’ll usually grab a .357 magnum rifle, but if I’m going some place where I don’t intimately know the lay of the land I’ll take the extra margin the .30-30 offers me.)

Over the years the .30-30 has sadly become less and less revered as more powerful rounds have become commonplace. In my neck of the woods, for instance, I’m told that one of the most popular deer cartridges is the .300 Winchester Magnum. Keep in mind that our black tail deer are commonly in the 125 to 150 pound range, and shooting distances rarely (if ever) exceed 150 yards, and the amount of overkill should become apparent. There are people who actually believe that deer can’t be taken with less, and I’ve met them in the gun stores! (Have I ever mentioned how I generally avoid gun stores, for this very reason?) I’ve even heard comments to the effect that a .30-30 can’t be reliably used to kill coyotes, let alone deer.

I think our ancestors, who used the then-new .30 WCF on everything that walked on four legs, are rolling over in their graves!

Have you thought about what happens AFTER your defensive shooting?