Purses and bags – are they really a good place to carry a gun?

Purses and bags – are they really a good place to carry a gun?

Lots of people do it, but what are the downsides?

“Off-body carry” (OBC) is a catch-all term for carrying a gun in something that is not attached to your person. We usually think of OBC as being in a purse (female-centric), but that’s not always the case; many men, I’ve found, carry their personal defensive firearm in a shoulder bag (“manpurse” or messenger bag) or a backpack.

The first major issue with OBC is the speed of employment. It’s much slower to retrieve a gun from a purse or messenger bag, even if it’s slung on the shoulder and oriented properly, than it is from most on-body carry positions. If the bag or purse isn’t in the right position (i.e., the access point is in the rear instead of in the front), access can take what seems like forever as the owner fishes for the opening. If the opening is in the top, slipping the bag on the wrong way places the butt of the gun 180 degrees from where it needs to be to get a grasp.

Those carried in a backpack (either single or double strap variety) are even slower, as the pack needs to be swung around to the front of the body (or taken off completely) to retrieve the gun. Frankly, it might as well be on the moon!

The second issue is that, given the sudden nature of most non-residential attacks, it’s likely that the altercation could be over before the firearm could even be accessed. That’s especially true because the carry container itself is often the cause of the attack: the criminal sees a purse or backpack and decides that there may be something of value in it, and attacks to steal it.

Now the defender has two choices: engage in a risky physical fight to keep from losing the thing which contains the gun (which was probably hoped would keep them from needing to get into a physical altercation in the first place), or let the bag go and put a firearm into criminal hands.

Down in Austin, for instance, police are looking for a couple of “violent” purse snatchers. These kinds of attacks are very common in many parts of the country, and less violent snatches are a fact of life in many urban (and not a few suburban) areas as well.

I understand that for some people OBC is the only way they can (or will) carry a defensive firearm. I’m not saying that it should be dismissed out of hand in every single case, but I will say that the number of people for whom OBC is a true necessity is much smaller than those who do it because it’s just really convenient.

Carrying a handgun in a shoulder bag or backpack carries some distinct and serious risks, and should only be done with full cognizance of those risks and with extensive practice in efficient deployment. (Some good hand-to-hand fighting skills would probably be a good idea as well.) If you, or someone you know, chooses this carry method you need to be aware of the very serious downsides. Always ask “is there another way of doing this that is more secure and faster to access and still compatible with my lifestyle?” In most cases I believe there is!

Bottom line: a gun carried in something that is simultaneously easily taken and difficult to get into is not ideal for self defense, and should only be chosen after exhausting all other possibilities (and don’t neglect the training!)

Making good training decisions is important to your well-being. Here's why.

Ed Harris: How to Make and Load All-Brass .410 Shotshells. 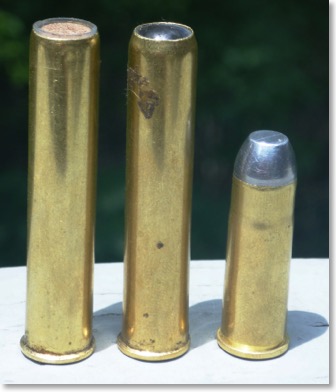