Things people say: “If it ain’t raining, it ain’t training!”

Things people say: “If it ain’t raining, it ain’t training!” 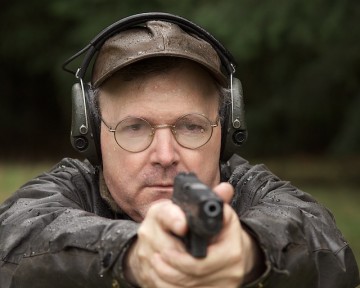 I remember my first serious (multi-day) defensive shooting course. It was a spring day in the early 1990s and, as is normal here in the Pacific Northwet (no, that’s not a typo) it was raining like crazy. It was a cold, wet, miserable day.

Being a native Oregonian I was prepared for the conditions, but that didn’t make them any less miserable.

As we assembled on the range for the first live-fire session of the weekend the rangemaster looked at the sky and proclaimed “if it ain’t raining, it ain’t training!” It’s a phrase I’ve heard hundreds of times since. It’s a favorite of the more “gung-ho” instructors, the kind who sprinkle their talks with phrases like “warrior” and “sheepdogs”.

For some reason a lot of the defensive shooting world has decided that adverse conditions lead to better learning. I’m not sure where this notion comes from, but the science of learning is pretty clear on the subject: adversity doesn’t result in better understanding or recall, nor does it lead to better physical skill development or retention. Being uncomfortable reduces the ability of students to learn, and the more intense the discomfort becomes — whether it’s pain, cold, heat, dehydration, or fatigue — the more the student will focus on the discomfort and less on the lesson.

One of the reasons for this belief, I suspect, is because of the influence  of military veterans in the shooting field. In the military training often happens in extreme conditions, many times as a way to build camaraderie and unit cohesion. That in turn has morphed into the idea that hardship is good for learning skills, because if the military trains that way it must be superior — right?

You’ve probably heard or seen my lessons on the concept of context in training. This mistaken notion is a good example: just because the Marines or SEALS do it doesn’t mean it’s appropriate (let alone effective) for the job you and I do in the civilian world. I didn’t need to build unit cohesion with the other 15 or so strangers in that class, but I did need to learn the skills being taught.

I didn’t learn them all that well, which in retrospect isn’t surprising. “If it ain’t raining, it ain’t training!” turned out to be exactly wrong, and always will. Human beings just don’t learn that way.

One of the arguments for the practice of training under adverse conditions is that you can’t control the environment where you might need those skills. If you’re forced to use your defensive handgun, for instance, it might be below freezing — or during a heat wave. You might be soaking wet from the rain or soaking wet from your own sweat. Wouldn’t it be a good idea, this line of thinking goes, for you to be able to use your skills under those conditions?

I have no argument with that. Yes, I do believe you need to know how to use your skill under a wide variety of conditions! Training, though, isn’t where you learn to do that; practice is.

Training is what you do to learn a new skill, to start to develop familiarity that you can later refine and solidify through repetition. Practice is different from training: practice is that repetition of the previously learned skill with the goal of developing proficiency and competency under a wide range of conditions.

I’m a big believer in practicing under realistic conditions: those which you could plausibly face. I believe it’s important to know what your limitations are and how your environment is going to affect your application of skill. Practice exists for that very reason.

Training in adverse conditions is counter-productive, for the reasons already covered. Practice in adverse conditions, on the other hand, is important: you take a skill you already know and understand and apply it to circumstances which are new and different. From that you learn what you can and can’t do, and perhaps even where you need to modify the skill to work effectively.

You can’t do that until you already know the skill through proper training.

If it ain’t raining, it’s time to be training!

I’d rather learn new skills in the most favorable conditions possible. I’ll understand the skill better; I’ll be more likely to absorb the nuances and subtleties being taught and remember them later when I go to practice. If I don’t have to focus on my own physical issues I can better concentrate on what the instructor is telling me, but more importantly I’ll be better able to focus on the all-important “why” of what I’m learning.

Conversely, I’d rather practice those skills in the less-than-favorable conditions. I’ll learn my own limitations, and perhaps the limitations of the specific skills or even my own gear. I’ll be able to see if there are changes I need to make in that skill or if it’s completely unworkable. I’ll also gain the confidence that comes from a deep understanding of my abilities.

Unfortunately it’s not as macho a sentiment, which explains why that ridiculous saying persists in the training world. It’s a sign that the person really doesn’t understand learning or teaching at a very deep level.

If it’s your instructor, maybe it’s time to seek out someone whose knowledge of the learning process is a little deeper than simple rhymes.

P.S.: I’m getting rave emails about my latest book, Protect Yourself With Your Snubnose Revolver. It’s the most comprehensive guide ever written to using the snubby effectively and efficiently. You can get your own copy right now on Amazon, in both Kindle and paperback versions, and on the iBooks Bookstore!
Listen to this blog – and subscribe to it on iTunes by clicking this link!

"What is mindset?" — an excerpt from my new book!

A gun on your nightstand isn't the best idea, no matter who says so