Ed Harris makes the .32ACP into a real tackdriver! 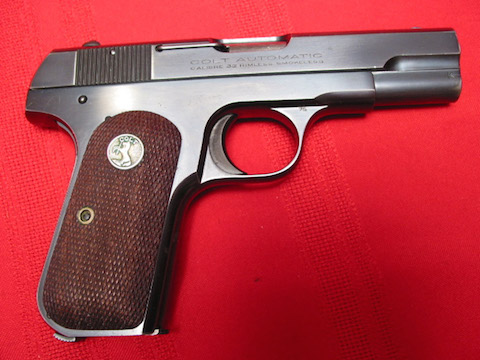 Ed Harris makes the .32ACP into a real tackdriver!

Ed Harris returns, and this time he’s tackling a new mystery: why does the .32ACP have such a bad reputation for accuracy? As usual, Ed gets to the bottom of the problem!

(Which gives me an excuse to show a picture of one of my favorite autoloading pistols of all time, the Colt Model 1903 Hammerless in — of course — .32ACP!)

——
Looking through the smoke and mirrors…
by Ed Harris

Much misunderstanding exists regarding the .32 ACP, caused by repeating the tradition, mythology and folklore in old Lyman manuals which recommends sizing cast bullets to the groove diameter of the barrel. This results in undersized bullets not fitting the chamber forcing cone or throat, causing leading at the origin of rifling and poor grouping.

Lead bullets should be of sufficient diameter to fit as closely as possible, so that the bullet upsets, forming a positive gas seal instantly upon discharge. But the bullet must not be so large as to impair free feeding and extraction of unfired rounds. The ideal condition is that bullet alloy hardness to be suited to the working chamber pressure, (wheelweight alloy works fine in the .32 ACP up to the full CIP maximum chamber pressure of 1600 bar or 23,200 psi!)

Cast bullets ideally should not be smaller than 0.0005” less than throat size. If chamber dimensions are unknown, a .311” cast bullet is usually correct and works in all. Some pistols with sloppy chambers and barrels can handle up to .314” with no issues. Make test dummy rounds and use the largest bullet which cycles, chambers fully and extracts freely in hand manipulation.

Typical .32 auto pistols vary all over the map with respect to barrel bore and groove dimensions, twist rate and chamber dimensions. Colts, Berettas and Walthers have 16 inch twist, whereas FNs, CZs and Mausers have 10 inch twists. Jacketed bullet diameters of European ammunition average .307-.309, whereas the barrels of Berettas, CZs and Colts often run .310-.311. I have never cast a .32 ACP chamber throat smaller than .311”, but have seen WWI and WWII era Spanish, French and Italian pistols with throats as large as .316”! These wide variations in barrels, as well as a wide range of factory jacketed bullet diameters from .307” (Norma) to .312” (Magtech) explains many of the accuracy problems people experience with the .32 ACP.

What does it take to make an old Beretta .32ACP shoot groups slightly over an inch at 25 yards? This!

Two custom barrels were similarly made to fit a Beretta target pistol in .32 ACP, of nominal .300 bore and 308 groove dimensions, in 10 inch and 14 inch twist, respectively, chambered with the same reamer. Firing off sandbags with a 4X Leupold scope, either barrel would shoot one-inch 5-shot groups at 25 yards with RWS hardball and 1-1/2 inches with cast bullet handloads. Just don’t ask what it costs to machine a chunk of Hart barrel and have custom chambering reamers and headspaces gages ground. If you need to ask that question, you really cannot afford it. Ahh…what we do for science!

Heavier cast bullets up to 90 grains work well with suitable loads, IF the bullet has a long-nose, with short shank, so that it does not protrude more deeply into the powder space than the base of the factory FMJ bullet. Otherwise tolerance stacking results in the heel of the bullet impinging against the internal taper of the case wall, causing a bulge at the bullet heel which precludes free chambering. Overall cartridge lengths of less than 0.95” raise chamber pressure, due to increased load density, and impair reliability, due to longitudinal shifting of unfired rounds in the magazine from recoil, causing “rimlock.”

The Accurate 31-087T bullet is designed especially for the .32 ACP, fits the throat of the CIP chamber and feeds reliably at a cartridge OAL from 0.95” to 0.97”. The RCBS 32-90CM is also a good choice. Both bullets are accurate from the lightest charges which will cycle reliable, about 1.5 grains of Bullseye, up to a full charge of 2 grains of Bullseye or (in suitably strong guns) 5.5 grs. of #2400. Do not shoot lots of heavy bullet loads in pistols with light aluminum alloy frames, because with continued use they are “frame crackers.”

The 2 grain Bullseye load with Accurate 31-087T works well in sturdy, steel-framed European holster guns such as the CZ27, CZ50, Walther PP, Mauser HSc, Beretta M1935, and Colt 1903 Pocket Hammerless, which were balanced for the original loads with heavier 73-74-gr. bullets and the equivalent of 2.5 grains of Bullseye, as described by Hatcher (Textbook of Pistols and Revolvers, 1935).

I recently tested WW2 German, steel cased, Berdan primed 7.65 Browning (aka. 32 ACP) ammo, from the estate of a WW2 vet. All of it went bang! And hit the 6″ gongs on the dueling tree at 10 meters. Velocities were impressive compared to today’s wimpy “lawyer” ammo, considering it was loaded with a 5 gram (77- grain) FMJ bullet. Velocity from the Nazi-marked CZ27 pistol it was packed with, was 981 fps, 17Sd over an 8 shot string. Velocity from my Beretta Model 3032 Inox Tomcat with 2.4″ barrel, was 907 fps, 14 Sd. These velocities compare to modern RWS 73-grain hardball, but do so with a slightly heavier 77-grain bullet.

The proof is in the shooting!

My shooting buddy “ER Doc” says that many patients have come across his table who have been shot with .32s. He says that FMJ rounds “bounce around inside the body cavity like a billiard ball” and do damage out of proportion to their energy, because the bullets typically tumble. The light recoil of the .32s makes accurate double or triple taps possible in 2 secconds or so, which partly compensates for lower kinetic energy. Reliable “rat, tat, tat” feeding, easily controlled, repetitive shot placement or “burst on target” with confident deep penetration of Euro hardball inspires more confidence to him than light-weight JHP “Jam-O-Matics” which dissipate their energy in penetrating a sternum or defensively positioned arm, lacking further resolve to bounce around inside the body cavity.

While a .32 ACP may not be your first choice if expecting trouble, any gun is better than not having one at all. And that is why many people have .32s, to avoid the temptation to go unarmed when discreet vigilance is better.

What is the big deal with mindset?

Is a rifle or carbine a good choice for home defense? Here's how to decide.