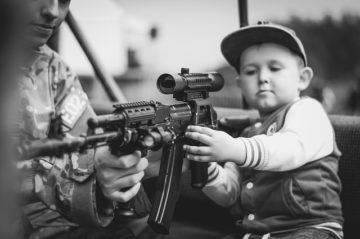 Last week I received an interesting email from a reader of my latest book, Protecting Your Homestead: Using a rifle to defend life on your property.

The sender was wondering about the utility of a lever-action rifle as a defensive tool, and said that he’d been told his lever action was only suitable for “short duration gunfights”. He was worried that his rifle wouldn’t be enough for self defense and asked if he should sell it off for something with higher capacity.

His fear is borne of one of those tactical hobbyist fantasies which drives a lot of misguided training and equipment choices in the self defense world.

The charms of “low” capacity rifles

In the book I express my appreciation for the lever-action as a defensive tool in and around the home. I like the slim, streamlined profile that makes it easy to retrieve and move with, the great balance, simple manual of arms, and the way those rifles shoulder for fast emergency shooting. I consider it to be a good defensive tool for those people who like its operating characteristics, and the capacity (particularly in those chambered for the Magnum pistol cartridges) is of little concern.

Similarly, I also praised the handling qualities of the short 20-round magazine for the AR-15. I like them because of their lower profile, lessened tendency to catch and snag on things in the environment, and the better balance that results from less weight forward of the gun’s control point. I put that in the book, knowing that my advice would likely fall on deaf ears; most AR owners won’t use anything less than a 30-round magazine in their rifle!

Lots of hobbyists in the defensive shooting world reject both the lever-action and the 20-round AR magazine for the same reason: because they’ve bought into the notion that every defensive rifle use is going to be an extended firefight with multiple heavily armed and highly motivated adversaries. This would be the “long duration gunfight”, which is a necessary construct to allow the existence of the aforementioned “short duration gunfight”.

This matched pair of mistaken ideas drives the tactical training fantasies which pervade the marketplace.

Try to find a defensive rifle course (other than mine, of course) where the lever-action isn’t at a manufactured disadvantage. You’ll discover it’s hard to do. Whether it’s assault drills that require double-digit numbers of rounds to be fired or exercises set up to reward emergency reloads, these courses presuppose that every defensive rifle use will be an intense firefight.

It’s hard to come away from such an event with anything but the conclusion that the lever-action rifle (or the 20-round AR magazine) is wholly inadequate to defend yourself. People who flock to those courses, or those who teach them, are the ones who spread these notions to others, like the writer of my email. They tried to convince him that his rifle is only good for a short-duration gunfight, when what he really needs — according to them — is to equip himself for a long-duration gunfight.

At least he had the good sense to ask before he did it!

Reality, what a concept

When you take the time to examine reality, though, that’s just not how defensive rifle uses work. In fact, it’s very rarely the case at all. (Even when you can find that outlier, that unicorn, where large quantities of ammunition are  expended, the incident virtually always ends up being an expected confrontation due to the defender’s own actions — and is almost always  related to large quantities of illicit drugs.)

If you’re not actively antagonizing other heavily armed groups of people, though, it’s very safe to assume that any defensive rifle use you happen to have is going to fall into the “short duration” category. No matter what the problem, if it requires the use of lethal force you’re likely going to solve it with whatever ammunition is in the gun.

Yes, I know you can find incidents where people have in fact emptied large-capacity magazines at their attackers. After examining more than a few such cases, and weeding out the drug deals gone bad and rival gang attacks, I’ve come to the conclusion that if someone isn’t hitting what they’re shooting at, no amount of ammunition will be enough. And so the myth of the long-duration gunfight is perpetuated.

In the world where you and I live, a lever-action rifle is enough. A 20-round magazine for the AR-15 is enough. (Even a tube-fed shotgun, which people also deride for its “low capacity”, is enough.) As I said in the book, this is not in any way a justification for government mandated magazine limits, only an acknowledgement that the rifle you have is almost certainly enough to protect your life and the other lives on your property, no matter how many rounds it holds.

If you read that paragraph again, you’ll notice a common theme: Knowing how to shoot your rifle, to hit what you need to hit at the distances you’re likely to encounter on your property, is what will make your rifle an effective defensive tool.

Regardless of how many rounds it holds.

P.S.: My aforementioned book, Protecting Your Homestead: Using a rifle to defend life on your property, is getting rave reviews for its no-nonsense approach to the defensive rifle. In it you’ll find practical, easy to understand information on using a rifle to protect the lives on your property. It’s the only book that covers  choosing, storing, retrieving, and shooting the defensive rifle across your yard, or across your field. Available in paperback, Kindle, and iBooks formats!

The importance of rifle balance