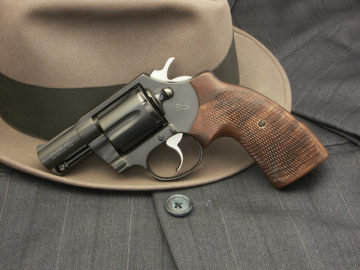 If you have a concealed carry firearm, and you use that firearm against another person, the chances of the police seizing that gun for evidence are very high. If your attacker is injured or dies, it’s a certainty that your gun will end up in the evidence locker.

Once in evidence, your gun will not be returned to you until after all legal proceedings are settled. Even then, it may be months or even years after the case has been closed before you get your firearm back. Many people have had to file legal proceedings to persuade the authorities to return their rightful property.

What happens to your gun?

Life in an evidence locker isn’t pleasant. Items are tagged and simply thrown in, without regard for maintaining their appearance or function. Some evidence rooms are in unheated basements where the humidity is high and rust is common. If your handgun or rifle goes into evidence, don’t expect to get it back in the same condition it was when the police took it from you.

This is just one of those little realities of life. It’s something you have to accept as part of the cost of self defense.

As a result, many people conclude that they don’t want to carry a “nice” or expensive gun to protect themselves. They settle for a cheaper gun which may not fit them as well as the one that costs more, or for a gun they don’t like to practice with — and consequently don’t.

I’m left to wonder: Is this a rational choice?

Why treat your gun differently than your car?

Let’s look at the question from a slightly different perspective.

Do you choose your car based on what you’d lose if it were wrecked? Do you worry about driving a nice car because it might be totaled by a drunk driver? Do you intentionally buy a cheaper car, perhaps with a lower safety rating and reputation, just because of the possibility that it might be completely lost in a crash?

Let’s say you’re shopping for a home. Do you intentionally buy a cheaper house because it might get destroyed in an earthquake? Do you forego good schools and lower crime rates and instead settle in a less-desirable area, simply because you’ll lose less if the house should burn down?

Mind you, as a minimalist I can give you many good reasons for buying “less” in both cars and houses, but fear of loss isn’t one of them. I can’t see buying a car that isn’t as safe or economical, or a house that isn’t in a good area and doesn’t have potential for resale value, just because you might lose it.

The same is true with your defensive firearm. If the gun which fits your hand, is efficient to use and is completely reliable, happens to be expensive relative to lesser choices, why deprive yourself of its protection just because you might need to use it against an attacker and you might not get it back in pristine condition.

The gun is an investment in your safety. When it comes to protecting your life and the lives of your loved ones, make that investment in the best tools you can get. I’m not saying you need to go all out and get a hyper-expensive firearm with full-coverage engraving and gold inlays, but you shouldn’t be shy of spending what you need to get the right gun for you — nor in carrying that gun with you wherever it’s legal to do so.

If you use it to save a life, that’s what you should focus on. If it comes back to you much later and worse for the wear, you can look at it and be thankful you had it in your hands when it mattered most.

Things can be replaced. Lives can’t. Don’t prioritize the first over the second.

P.S.: Speaking of protecting yourself and your family, if you have a revolver you rely on for self defense you’ll want to take my Threat-Centered Revolver class in Phoenix March 17th & 18th! I’ll be teaching people how to use their revolvers efficiently and effectively to protect lives. If this sounds like something you’d like to attend, you’re in luck because there are still openings available!  Click here to go to the signup page.
Listen to this blog – and subscribe to it on iTunes by clicking this link!

What does "preparing for the worst case" mean?