Questioning the premise of your preparations

Questioning the premise of your preparations 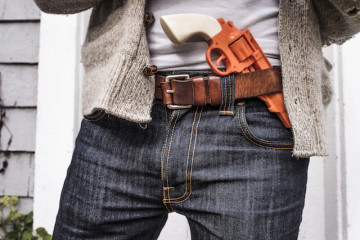 My apologies if you’re not a fan of the show South Park, but an old episode has a training lesson for us.

On that episode, some little people known as Underpants Gnomes presented their 3-part success plan:

The joke, of course, isn’t that there’s nothing in Phase 2; it’s that you can’t make money from stealing used underwear no matter what Phase 2 is. That same lack of “big picture thinking” happens in the defensive training world, too.

Some time back I ran into a fellow who was telling me about the “go kit” he had stashed in the trunk of his car. In it, he bragged, was his accessory-laden AR-15 and a chest rig loaded with full magazines, along with assorted tactical gear such as his flashlight equipped Glock in a Kydex drop-leg holster of some sort.

Why did he carry this stuff with him? He said that if there was an active shooter in a local school, he wanted to be able to “take the fight to them”.

I probably should have kept my mouth shut, but I’ve run into too many of these people and I guess I just snapped. So I asked: “just how are you going to do that?”

He blinked a little bit and started talking about “making entry” and using “dynamic movement” and all that sort of thing. He learned his stuff, he said, in classes taught by Special Forces types.

“First things first”, I asked. “How will you even know there’s an active shooter in the school? Do you have a radio capable of monitoring the police dispatch AND tactical frequencies, and do you listen to it constantly? Let’s say that you somehow manage to get into the school before the police arrive. Do you know how to locate a shooter in a large building? How are you going to keep from being shot by the first responding officers? By the time you hear about this active shooter, the police will have cordoned off the area and anyone carrying a rifle who doesn’t have a shiny badge is likely to get shot for his trouble.”

I could have gone on, but it was obvious he’d not thought through his underlying premise.

When you’re planning your personal preparedness education, start with the risks you actually face and the ones you can actually do something about. Don’t just think about shooting bad guys, either! Think about all of the other dangers to your health and well being that you could conceivably face on any given day.

For instance, how would you handle severe bleeding as the result of a car accident? How about keeping from freezing in very cold weather or suffering heat injuries in very hot weather? How would you get home if an earthquake damaged the bridge over the river you need to cross? What would you do if your car broke down on a long, lonely stretch of sparsely traveled road? What could you do if angry protesters have you and your co-workers trapped in your downtown office?

Now think about how you might learn how to deal with those very common kinds of incidents. Think about what you’d need to do and what tools you could easily carry with you that might make the difference in the outcome.

Because ultimately It doesn’t matter how fast you’re going if you’re on the wrong road to begin with.

"You can't have everything. Where would you put it?"

Fast food drive-throughs can be dangerous. Here's how to deal with them safely.