Ogives: secant, tangent, and why the hell should I care? What’s an ogive, anyhow?? 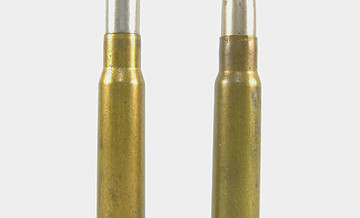 There was a time when I was really into the 6.5/284 cartridge (back when it was still a wildcat.) It was a pain to load for, and I never really understood why until someone taught me about ogives.

The ogive is in fact a major part of the ballistic performance of any bullet, and making that shape as gradual as possible leads to higher BCs. That means that they have less drag when traveling through the air, preserving more of their initial velocity and have shorter travel time to the target. This is one of the keys to long range shooting: bullets that shoot flatter and faster.

The exact shape has a definition, and there are two ogive shapes commonly used in high performance rifle bullets: the tangent (or spitzer) ogive, and the secant ogive.

The secant ogive tapers more gradually relative to its length than does the tangent ogive, which gives higher BCs and less drag. The tangent ogive might be a little less aerodynamic, but its steeper taper means more material under the curve, which translates to a heavier bullet for any given length.

If that were all there were to it my life would have been so much easier, but the quest for better long range performance means looking for less drag, which means those secant ogives.

Now as it happens the more gradual taper of the secant ogive means that the curved part of the bullet meets the straight bearing portion of the bullet more abruptly than the tangent ogive. Now you wouldn’t think that would be a problem — I certainly didn’t — especially since the whole idea is to reduce the bullet drag as much as possible. Who cares about that little meeting point?

The problem is that abrupt junction makes it much more difficult for the bullet to align itself when it meets the rifling. Poor alignment means that the bullet goes into the bore ever so slightly askew, and as a result accuracy suffers. The more gentle intersection of the tangent (spitzer) ogive gives more leeway for the bullet to self-align; it’s more forgiving.

The way to help a bullet with a secant ogive to more precisely align itself in the bore is to carefully control the seating depth, which in turn controls where the bullet hits the rifling. There is always a “sweet spot” where the seating depth is just right, allowing the bullet to go into the bore at just the right point so that it’s perfectly aligned. The trouble is that a difference of a couple of thousandths of an inch in seating depth can change group sizes dramatically!

That was my problem with my 6.5/284 rifle. The VLD type (Very Low Drag) bullets I was using to get the most out of that high performance round had a secant ogive: that’s what gave them the nice, high BC I was looking for. The trouble, as you now know, is that their abrupt juncture meant that they were incredibly sensitive to seating depth. Combine that with a very powerful cartridge with a relatively short neck, and loading for it became a real challenge — one I got tired of!

Today there’s a new kid on the block. The latest long range bullet designs have what’s known as a hybrid ogive, one which combines the long taper of the secant profile with the gradual transition of the tangent. The result are bullets with a high BC, very aerodynamic, but which are much more tolerant to seating depth variations. I sure wish I’d had those about a decade ago. Maybe I wouldn’t have given up on the 6.5/284!

There’s a really good article about ogives, their effects on ballistics and accuracy, and the new hybrid ogives over at accurateshooter.com. I encourage you to read about this seemingly esoteric part of rifle bullet design!