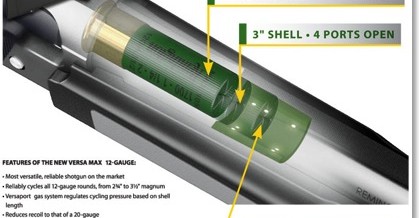 Sometimes when I teach I learn something new. That happened to me just the other day!
Last week I was down in California doing some training for a private group at a members-only range. This was my second teaching trip to this particular club, and I must say I enjoy it immensely!

One of the students had a shotgun I’d heard about, but not actually had the chance to shoot — the Remington Versa Max Tactical. For those not familiar, the Versa Max is a 12-gauge shotgun using a unique gas system: gas is bled from the chamber area, where it is much hotter than that taken from close to the end of the barrel. The hotter gas tends to make the system self-cleaning, and according to the owner (and a couple of others in the group who own them as well) it will digest thousands of rounds between cleanings.

(One of them told me that his personal Versa Max ran 7,000 rounds with only three cleanings during that time. I’d like to try that with our Remington autoloaders, but anyone who has experience with the 11xx-series shotgun knows full well it will never make it!)

The system is also self-adjusting. The VersaPort gas ports are arranged so that the lightest shells (the 2-3/4″ variety) leave seven gas ports open, while the heavier ones (the 3-1/2″ Magnums) leave only three ports open. The result is just the right amount of gas pressure to operate the action regardless of the shell loaded. These owners, who shoot their guns every week, tell me it works as advertised.

The real thing I wanted to know, however, is whether Remington’s claim about reducing felt recoil to that of a 20-gauge was true. The owner handed me his gun and six 2-3/4″ slugs, and I nervously loaded the first three. I hate shooting slugs from a 12-gauge (or a 20-gauge), and was not really looking forward to the experience!

The first round surprised me; it certainly didn’t feel like a 12-gauge. I fired the second and third rounds, and was convinced: it definitely recoiled much less than a 12-gauge normally does, and very close to what I’d consider normal for a 20-gauge.

I eagerly thumbed in the remaining three rounds and launched them downrange as fast as I could pull the trigger. The muzzle stayed on target and I was able to easily control the rearward push, much easier than any other autoloading “12” I’d ever used. I’d say their claims are true!

My only complaint, as with any other shotgun made today, is that the regular stock is too long for my short arms. I’d like to see a youth model with a length of pull about an inch less to fit other short-statured shooters.

I’d also like to see what this gas system could do for a a 20-gauge; I can only imagine how soft-shooting that would be, and of course it could be made on a smaller, lighter frame that would be more pleasant to carry and swing on target. I did a quick Google, and supposedly Remington is set to introduce that sometime this year.

Perhaps I’d better be careful what I wish for. A 20-gauge Versa Max might force me to buy two of the darned things, because once my wife gets her hands on one and finds out that it will run rings around her 1100 I’ll have no choice!