How do the Swiss make a sniper rifle? Carefully. Very carefully! 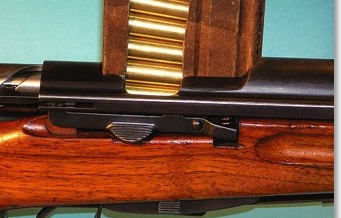 As you might guess from my watch & clockmaking youth, I admire the Swiss. I especially admire the way their commitment to self-preservation scared off the Nazi war machine when everyone around them was being invaded. What was their secret? Accurate rifles and soldiers who knew how to use them!
——
Ahh, the Swiss. Aside from chocolate and fine timepieces (two things of which I’m fond), they’re known for producing quality firearms. The SIG P210, for instance, is a gloriously precise pistol, finely fitted (in stark contrast with the offspring of their unholy alliance with the German firm of Sauer & Sohn, which are crude devices in comparison.) Do I need to mention that it is superbly accurate as well? Didn’t think so.
If one were to nominate a rifle to compliment the P210, it would likely be the Karabiner Model 1931 — often referred to in short by the nomenclature “K31”. Chambered in the often overlooked 7.5×55 Swiss cartridge, the K31 features a beautifully machined straight-pull bolt. The gun is nicely constructed and fitted, surprisingly so for a military arm issued to rank-and-file troops. (The rifle is often erroneously referred to as a Schmidt-Rubin, which is not correct. Schmidt designed the action of the Swiss army’s first straight-pull rifles, but the K31 is a completely different design. Rubin’s name could be fairly associated with the rifle, for he was the designer behind the cartridge.)The K31 rifle operates like, well, a Swiss watch: everything slides into place smoothly and predictably, with a reassuring sound of quality. Operating the bolt on a K31 is very much like closing the cylinder on a Colt Python: there is just something so right about it!

I shouldn’t need to say that the K31 is a superbly accurate rifle, but I will. In any other country the gun would have been considered a marksman’s rifle in its stock form, but for the Swiss snipers it wasn’t good enough. From the K31 action Eidgenossische Waffenfabrik developed the ZfK-55 sniper rifle, adding a scope, muzzle brake, pistol grip, and a much heavier barrel for enhanced accuracy.

They didn’t stop there, however. The Swiss military wanted to maintain full functionality of the rifle but, with a scope being needed for precision shooting, there was a tiny little problem: the scope covered the port in which the stripper clips were placed for loading the magazine. Now they could have simply offset the scope (like we did on our Garands), but that introduces windage corrections and cheek weld problems. Can you imagine what that would do to someone with OCD? Well, that’s what it did in Bern.

The solution was typically Swiss: they’d modify the entire rifle, rotating the action 15 degrees to clear the stripper clip guide from the scope. This meant that they could have a center-mounted scope and still use their stripper clips. All they needed to do was spend the money to do it, which they did. I can’t imagine what it cost to build these very limited production rifles!

Today ZfK-55 rifles are very collectible and naturally rare. Since they’re not really based on any existing rifle (even the K31 action is heavily modified for the role) fakes are unheard of, so if you want one you have to pony up.

Naturally Ian at Forgotten Weapons made a video aout the ZfK-55, and it’s a good chance to see the lengths to which the Swiss would go to get what they wanted!